While this decision does not directly impact how employers may provide or restrict coverage for abortions via their group health plans, the ability for states to now vary their approaches toward abortion coverage as desired may require employers to reconsider how such coverage is provided, if any.

The Supreme Court’s previous decisions in Roe v. Wade (1973) and Planned Parenthood v. Casey (1992) ruled that the Constitution of the United States generally protects a woman's liberty to choose to have an abortion, striking down many U.S. federal and state abortion laws that restricted abortion rights.

Since these decisions, there has been no federal legislation or regulations to further protect abortions or require insurance to cover abortions.  However, the Hyde Amendment, originally passed in 1977 and approved annually by Congress, bars the use of federal funds to pay for abortion, except to save the life of the woman, or if the pregnancy arises from incest or rape. That being the case, many employer-sponsored health plans do currently cover some level of abortion-related medical services.

At the state level, approximately half of the states have restrictive laws and regulations in place, several of which have “trigger laws” that further restrict or prohibit abortions upon the reversal of Roe v. Wade. State abortion restrictions vary widely, but generally target insurance coverage of abortions or abortion providers, ban abortions beyond certain gestational ages (e.g., 20 weeks), and impose mandatory ultrasounds and waiting periods. Some, such as the recent legislation passed in Texas, broadly target any individual who aids or abets an abortion. On the other hand, many states have at least some supportive or protective abortion laws and regulations, and 6 states require coverage of abortions for private health insurance. A map showing which states have laws limiting or requiring coverage is available here. 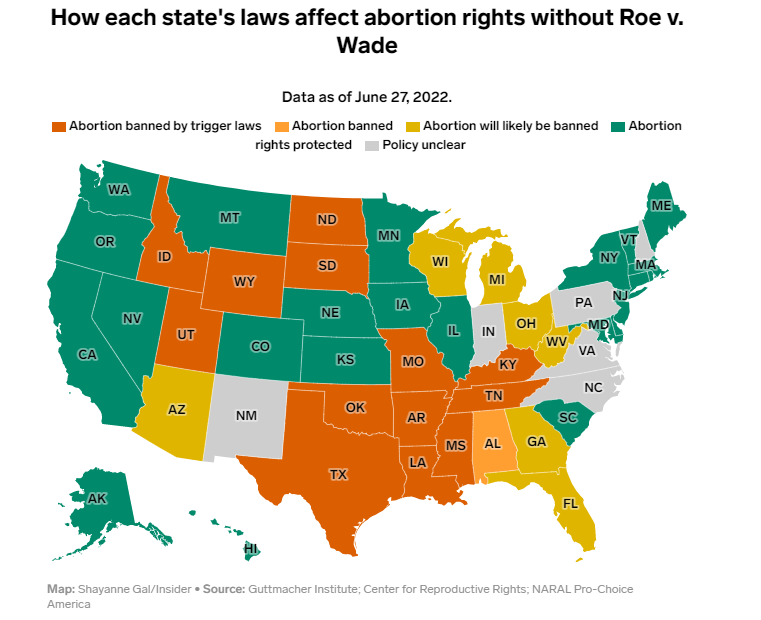 In Dobbs v. Jackson Women’s Health, the previous decisions in Roe v. Wade and Planned Parenthood v. Casey were overturned. The Supreme Court held that the right to abortion is not constitutionally protected, and that the authority to regulate abortion is returned to the people and their elected representatives, allowing states to require or prohibit coverage for abortions as desired.

We expect that state law will continue to evolve, with some states choosing to regulate not only plans, employers, and individuals residing within their own states, but also attempting to exert extra-territorial (out-of-state) enforcement authority.

How this change affects group health plan coverage offered by employers will be different depending on whether the plan is fully-insured or self-funded, as well as where the plan is issued, and where the employees work and reside. We recommend that employers carefully review their group health plans to understand what level of coverage for abortion is currently available. Also, to the extent an employer has employees in a state with particularly strong prohibitions on abortion, consultation with legal counsel is highly recommended.

Employers offering fully-insured plans will not have much choice as to what level of abortion coverage is provided, if any. Insurance carriers will tailor fully-insured plans to provide coverage in accordance with applicable state law. The state laws that apply to a group health insurance policy are generally based on where the policy is issued, not on where the employer is located, or where employees or participants reside. As discussed above, in some states, coverage for abortion is required, while in others, coverage for abortion is prohibited. For this reason, employers operating across several states may choose to obtain coverage from an insurer in a state which more closely reflects their desire to provide or restrict abortion coverage.

Employers subject to ERISA and offering self-funded plans have more flexibility to determine plan design and coverage, including for abortion, due to ERISA preemption. Such plans are generally able to ignore state laws and instead follow only federal laws and regulations. Self-funded group health plans are not subject to state insurance laws, which typically regulate insurance carriers. However, there is less clarity on how state laws imposing civil or criminal penalties on individuals or providers who assist with obtaining abortions may impact employers (or their group health plans) if coverage for abortions is made available. For this reason, employers should review their current coverage, as well as where covered employees reside, to understand if there is any potential risk based on applicable state law(s). If there is a desire to provide any level of abortion coverage, the employer should make sure that the plan language is clear as to exactly what is covered, and also confirm how the stop-loss carrier will provide coverage.

It is perhaps more common that abortion coverage, if any, is provided under the employer’s group medical plan. However, coverage (or reimbursement) might also be available under a separate group health plan (e.g., a health reimbursement arrangement (HRA)). Some employers have suggested putting in such arrangements to reimburse travel and lodging expenses related to abortion for those who may need to travel to obtain a legal abortion. A few things to consider for stand-alone group health plan offerings:

Reimbursement may also be available via a health flexible spending arrangement (FSA) or health savings account (HSA) so long as the expenses qualify for tax-favored treatment at the federal level.

Coverage for qualifying medical expenses, as defined in §213(d), may be covered or reimbursed on a tax-favored basis for federal tax purposes. Coverage for abortions, as well as related travel and lodging (up to $50/night), are qualifying medical expenses. However, the tax-favored status may not be available if such coverage is for illegal services (e.g., not legal in the state in which the abortion is performed). Further IRS guidance on this would be helpful.

Regardless of whether tax-favored coverage or reimbursement is available for federal tax purposes, state taxation must be considered separately. It seems likely that states with protective abortion laws and regulations would allow for tax-favored treatment of such coverage, while those with restrictive or prohibitive abortion laws would require taxation of any such coverage for any individuals residing in such states.

Coverage for contraceptives is separate, but related to, coverage for abortions. Non-grandfathered group health plans are currently required to cover contraceptives with no cost-sharing, unless the group health plan is sponsored by a religious organization, or by an employer with religious or moral objections to providing such coverage. This requirement remains unchanged, but there is speculation that there could be additional challenges coming against such coverage requirements.

In the short-term, employers offering fully-insured plans may have their coverage adjusted by the carriers in accordance with applicable state law (generally in the state in which the policy is issued). Employers will have little control over this, but should be aware of what is covered or excluded. If there is a desire to provide abortion-related coverage not available through the fully-insured plan, the employer could offer a separate self-funded group health plan (e.g., HRA). Employers offering self-funded plans have a little more control over abortion coverage, but should carefully consider the risk of any state law attempting to punish individuals or entities who aid or support abortions. We expect these types of state laws, and their impact on employers, will be the subject of significant litigation over the coming years. Many employers may choose not to make any immediate changes, relying on ERISA preemption and waiting to see how the various state law requirements are implemented and challenged.

In addition to any group health plan coverage decisions, because there are divided views on this topic, we recognize that there are also employee relations considerations. We encourage employers to discuss how to address any employee communications with HR/employment law counsel. It may also be beneficial to determine how any employee assistance program (EAP) or other benefit offerings may assist employees with reactions regarding this Supreme Court decision.

This situation will continue to evolve, and Amwins recommends that you stay in touch with your legal and health advisors.  Amwins will continue to keep you apprised of any significant new developments

Learn more and get state-level information